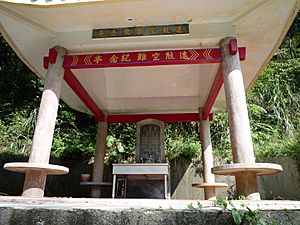 The cenotaph of the Far East Air Transport Flight 103 accident

Although there was early speculation that the crash was caused by a bomb, an investigation by the Republic of China Civil Aeronautics Board concluded that severe corrosion led to a pressure hull rupture. The severe corrosion was due to the many pressurization flight cycles the aircraft had experienced, and that cracks produced were probably undetected.

The wreckage was scattered across an area of 4 miles (6 km) located some 94 miles (151 km) south of Taipei. All 110 people onboard (110 passengers and crew, including eighteen Japanese citizens (among them Kuniko Mukōda) and two Americans) died. The accident was Taiwan's worst air disaster at the time, but is now the second-worst, behind China Airlines Flight 676.

All content from Kiddle encyclopedia articles (including the article images and facts) can be freely used under Attribution-ShareAlike license, unless stated otherwise. Cite this article:
Far Eastern Air Transport Flight 103 Facts for Kids. Kiddle Encyclopedia.