Farm Island Township is a township in Aitkin County, Minnesota, United States. The population was 1,099 as of the 2010 census.

Farm Island takes its name from a lake island of the same name, which was cultivated by the Ojibwe people.

During the period 1896–1912, the community was served by a post office named Dorris. The community is still referred to by some as Dorris. The historic Cedar Lake Lutheran Church and adjacent cemetery are both locally referred to by the name Dorris. Early immigrants in the area include the Roms (Carlsons), Dummers, Rudes (Ruds) and Petersons. In 2006 the Rom Poultry Farm ended their egg business. Much of the land was originally transferred to the railroad, and subsequently sold to settlers. The terrain reminded the surveyors of Switzerland, and so named the Switzerland Trail (now Township Road 96).

The township's Pine-Hickory Lakes Roadside Parking Area was developed as a New Deal project from 1937 to 1938 and has been listed on the National Register of Historic Places. 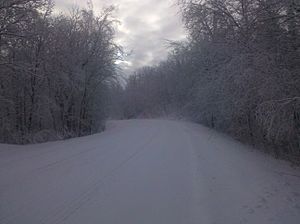 The township contains these two cemeteries: Diamond Lake and Dorris.

There were 434 households out of which 25.6% had children under the age of 18 living with them, 71.4% were married couples living together, 3.5% had a female householder with no husband present, and 22.8% were non-families. 19.1% of all households were made up of individuals and 9.0% had someone living alone who was 65 years of age or older. The average household size was 2.47 and the average family size was 2.79.

All content from Kiddle encyclopedia articles (including the article images and facts) can be freely used under Attribution-ShareAlike license, unless stated otherwise. Cite this article:
Farm Island Township, Aitkin County, Minnesota Facts for Kids. Kiddle Encyclopedia.