Farrell Flat (formerly Hanson) is a town in South Australia. The town is located 20 kilometres (12 mi) east of Clare and 22 kilometres (14 mi) southwest of Burra on the former Peterborough railway line, in the Regional Council of Goyder. At the 2006 census, Farrell Flat and the surrounding area had a population of 294. 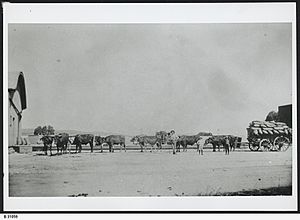 Once the heart of a thriving farming community, Farrell Flat today is largely a satellite town to the larger towns nearby. It has retained its own identity, with a functioning hotel, cafe and meeting house, engineering business and grain silos.

All content from Kiddle encyclopedia articles (including the article images and facts) can be freely used under Attribution-ShareAlike license, unless stated otherwise. Cite this article:
Farrell Flat Facts for Kids. Kiddle Encyclopedia.