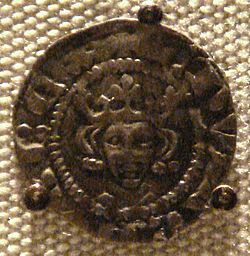 Farthing of Edward I

The farthing was a coin of the Kingdom of England. It was worth one quarter of a penny, or 1⁄960 of a pound sterling. The word 'farthing' is derived from the Anglo-Saxon feorthing. It means a fourthling or fourth part. The Anglo-Saxon word was probably derived from the Old Norse, fjorthungr meaning a "quarter".

Such coins were first minted in England in silver in the 13th century. They were used until the Kingdom of England was merged into the new Kingdom of Great Britain in 1707. Early farthings were silver. The farthing was small (only 10 millimeters in diameter) and very light (slightly more than 0.4 gram). Surviving examples are rare. The first copper farthings were issued during the reign of King James I. In the late 17th century the English farthing was also minted in tin.

In 1953, the farthing's low value forced its last minting. A Londoner complained of abusive vendors when he tried to offer the coin for purchases. The coin ceased to be legal tender on 1 January 1961.

All content from Kiddle encyclopedia articles (including the article images and facts) can be freely used under Attribution-ShareAlike license, unless stated otherwise. Cite this article:
Farthing (English coin) Facts for Kids. Kiddle Encyclopedia.