Pleasure Island is a coastal island in Southeastern North Carolina, USA south of Wilmington. Most of the island is located within Federal Point Township, in New Hanover County, but its very southernmost tip extends into Smithville Township, in Brunswick County. The coastal towns of Carolina Beach and Kure Beach, as well as the annexed community of Wilmington Beach, are located on the island. The Atlantic Ocean lies on the island's east side, the Cape Fear River lies on the west, the north side is bordered by Snows Cut (part of the Atlantic Intracoastal Waterway) and Carolina Beach Inlet. The southern end of the island was separated from Bald Head Island by Corncake Inlet until the inlet was shoaled and closed in 1998 by Hurricane Bonnie; thus, technically Pleasure Island and Bald Head Island are not separate islands. Prior to the 1930 completion of Snow's Cut, the land that now forms Pleasure Island was in fact a peninsula known as Federal Point. 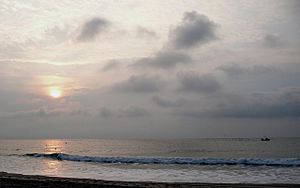 Found on the island is the eastern side of the Sunny Point Army Terminal, Carolina Beach State Park, and Fort Fisher. U.S. Highway 421 is the only route on the island, and provides the only bridge access. A ferry at US 421's southern terminus connects Pleasure Island to Southport at North Carolina Highway 211. The Island Gazette is a local newspaper that serves the island communities.

All content from Kiddle encyclopedia articles (including the article images and facts) can be freely used under Attribution-ShareAlike license, unless stated otherwise. Cite this article:
Pleasure Island (North Carolina) Facts for Kids. Kiddle Encyclopedia.