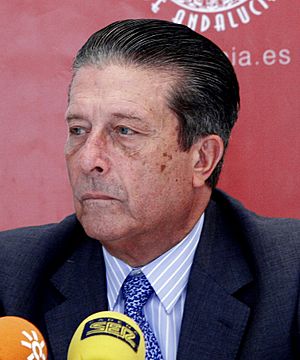 At the Universidad Internacional de Andalucia in 2007.

Federico Mayor Zaragoza (born 27 January 1934) is a Spanish scientist, scholar, politician, diplomat, and poet. He served as Director-General of UNESCO from 1987 to 1999. He was born in Barcelona.

All content from Kiddle encyclopedia articles (including the article images and facts) can be freely used under Attribution-ShareAlike license, unless stated otherwise. Cite this article:
Federico Mayor Zaragoza Facts for Kids. Kiddle Encyclopedia.