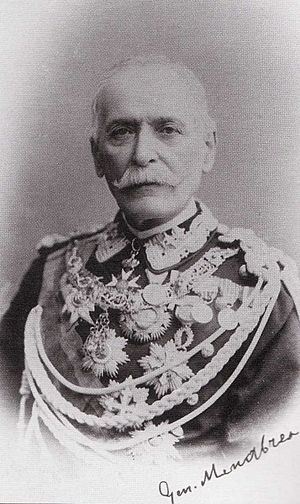 Luigi Federico Menabrea (September 4, 1809 – May 24, 1896), later made Count Menabrea and Marquis of Valdora, was an Italian general, statesman, mathematician and diplomat.

Menabrea was born at Chambéry, then part of the Kingdom of Sardinia. He was educated at the University of Turin, where he qualified as an engineer and became a doctor of mathematics. In 1842 he wrote Sketch of the Analytical Engine Invented by Charles Babbage, Esq., a publication that influenced Ada Lovelace.

In 1848 he began his political career, and was elected deputy in the Parliament of Piedmont; later he was Minister of War and Foreign Minister. Menabrea fought the Second Italian War of Independence; in 1860 he became lieutenant-general and conducted the siege of Gaeta: after this battle, he was appointed senator and received the title of count.

Luigi Federico Menabrea became Prime Minister of the Kingdom of Italy October 27, 1867 and remained in power until December 14, 1869. His government is remembered for three things:

He was very strict in enforcing his laws: in fact he ordered to the General Raffaele Cadorna to suppress in the blood the popular uprisings.

His government fell because the two ministers withdrew their support. Menabrea was later ambassador to London and Paris. He died in Saint-Cassin.

All content from Kiddle encyclopedia articles (including the article images and facts) can be freely used under Attribution-ShareAlike license, unless stated otherwise. Cite this article:
Federico Menabrea Facts for Kids. Kiddle Encyclopedia.