In cryptography, a Feistel cipher is a symmetric structure used in the construction of block ciphers, named after the German IBM cryptographer Horst Feistel; it is also commonly known as a Feistel network. A large set of block ciphers use the scheme, including the Data Encryption Standard

The Feistel structure has the advantage that encryption and decryption operations are very similar, even identical in some cases, requiring only a reversal of the key schedule. Therefore the size of the code or circuitry required to implement such a cipher is nearly halved.

Feistel construction is iterative in nature which makes implementing the cryptosystem in hardware easier.

Feistel networks and similar constructions are product ciphers, and so combine multiple rounds of repeated operations, such as:

Bit shuffling creates the diffusion effect, while substitution is used for confusion.

Many modern symmetric block ciphers use Feistel networks, and the structure and properties of Feistel ciphers have been extensively explored by cryptographers. Specifically, Michael Luby and Charles Rackoff analyzed the Feistel block cipher construction, and proved that if the round function is a cryptographically secure pseudorandom function, with Ki used as the seed, then 3 rounds is sufficient to make the block cipher a pseudorandom permutation, while 4 rounds is sufficient to make it a "strong" pseudorandom permutation (which means that it remains pseudorandom even to an adversary who gets oracle access to its inverse permutation). Because of this very important result of Luby and Rackoff, Feistel ciphers are sometimes called Luby-Rackoff block ciphers. Further theoretical studies generalized the construction, and defined more precise limits for security. 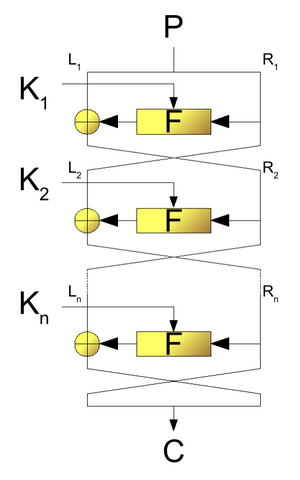 Feistel network operation on block cipher, where P is the plaintext and C is the ciphertext

be the round function and let

be the sub-keys for the rounds

Then the basic operation is as follows:

Then the ciphertext is

are not switched after the last round.)

Decryption of a ciphertext

is accomplished by computing for

is the plaintext again.

One advantage of this model is that the round function

does not have to be invertible, and can be very complex.

The diagram illustrates the encryption process. Decryption requires only reversing the order of the subkey

using the same process; this is the only difference between encryption and decryption:

Unbalanced Feistel ciphers use a modified structure where

are not of equal lengths. The MacGuffin cipher is an experimental example of such a cipher.

All content from Kiddle encyclopedia articles (including the article images and facts) can be freely used under Attribution-ShareAlike license, unless stated otherwise. Cite this article:
Feistel cipher Facts for Kids. Kiddle Encyclopedia.