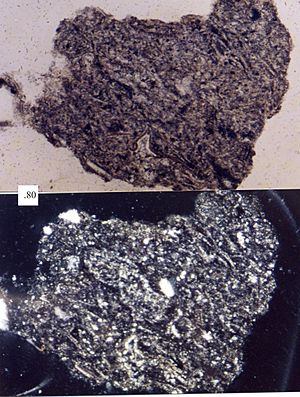 A felsic volcanic rock fragment, as seen in a petrographic microscope. Scale box is in millimeters 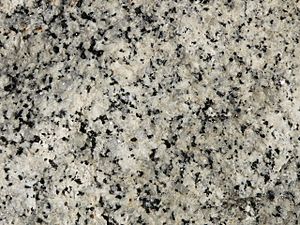 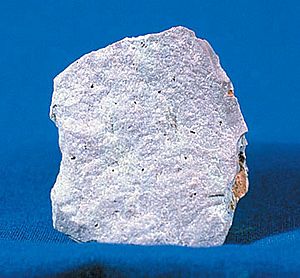 A specimen of Rhyolite

The word "felsic" is a term used in geology to refer to silicate minerals, magma, and igneous rocks which are enriched in the lighter elements such as silicon, oxygen, aluminium, sodium, and potassium.

They are usually light in colour and have specific gravities less than 3. The most common felsic rock is granite, but others include quartz, muscovite, orthoclase, and the sodium-rich plagioclase feldspars. In terms of chemistry, felsic rocks are on the other side of the rock spectrum from the mafic rocks.

In order for a rock to be classified as felsic, it generally needs to contain more than 75% felsic minerals; namely quartz, orthoclase and plagioclase. Rocks with greater than 90% felsic minerals can also be called leucocratic, meaning 'light-coloured'.

The rock texture thus determines the basic name of a felsic rock.

All content from Kiddle encyclopedia articles (including the article images and facts) can be freely used under Attribution-ShareAlike license, unless stated otherwise. Cite this article:
Felsic Facts for Kids. Kiddle Encyclopedia.