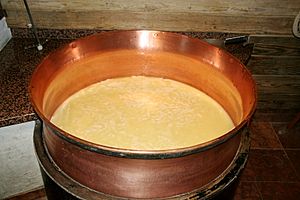 Fermentation is when a cell uses sugar for energy without using oxygen at the same time.

'Fermentation' also describes growing microorganisms on a growth medium. This is done to get a chemical product. French microbiologist Louis Pasteur studied fermentation and its microbial causes. The science of fermentation is known as zymology.

Yeast is an organism that ferments. When yeast ferments sugar, the yeast uses sugar and produces alcohol. The process uses the coenzyme NAD: In metabolism, NAD helps redox reactions, carrying electrons from one reaction to another. Fermentation is a less efficient form of respiration than oxidative respiration (respiration using oxygen).

The ethyl alcohol produced by yeast is used to make beverages or biofuel. Yeast can be also used to grow bakery products like bread and cakes faster. In some cases yeast might be used to speed up the process of creation of wine.

Other cells make vinegar or lactic acid when they ferment sugar. In a different way, the fermentation process can continue and turn the alcohol into vinegar i.e. acetic acid.

When yeast ferments, it breaks down the glucose (C6H12O6) into ethanol (CH3CH2OH) and carbon dioxide (CO2).

All content from Kiddle encyclopedia articles (including the article images and facts) can be freely used under Attribution-ShareAlike license, unless stated otherwise. Cite this article:
Fermentation Facts for Kids. Kiddle Encyclopedia.