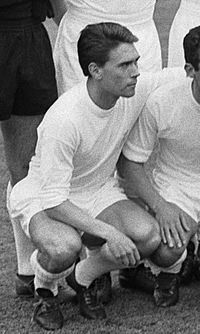 Fernando Rodríguez Serena (28 January 1941 – 15 October 2018) was a Spanish footballer. He played as a midfielder. Serena was born in Madrid. He played for Real Madrid for five years, and was a part of their European Cup winning squad in 1966.

Serena died of complications from Parkinson's disease on 15 October 2018 in Madrid at the age of 77.

All content from Kiddle encyclopedia articles (including the article images and facts) can be freely used under Attribution-ShareAlike license, unless stated otherwise. Cite this article:
Fernando Serena Facts for Kids. Kiddle Encyclopedia.