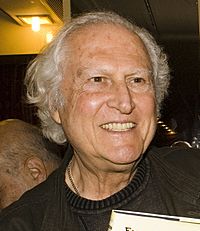 He was National Senator representing the Autonomous City of Buenos Aires for six years from 2013 to 2019. He was a member of the Proyecto Sur. In 2007, he unsuccessfully ran for President of Argentina.

All content from Kiddle encyclopedia articles (including the article images and facts) can be freely used under Attribution-ShareAlike license, unless stated otherwise. Cite this article:
Fernando Solanas Facts for Kids. Kiddle Encyclopedia.