Kids Encyclopedia Facts
This page is about the bridge. For the town, see Fernbridge, California.

Fernbridge is a 1,320-foot-long (402.3 m) concrete arch bridge designed by American engineer John B. Leonard which opened in 1911 at the site of an earlier ferry crossing of the Eel River. Fernbridge is the last crossing before the Eel arrives at the Pacific Ocean, and anchors one end of California State Route 211 leading to Ferndale, California. When built, it was named the "Queen of Bridges" and is still the longest functional poured concrete bridge in operation in the world.

After 17 years of petitioning by residents of Ferndale and the Eel River valley, Humboldt County Supervisors accepted bids for construction in 1910, and work started March 20 of that year. Reinforced concrete was used because studies after the 1906 San Francisco earthquake along 296 miles (476 km) of the San Andreas Fault from Ferndale south to San Jose, California showed that reinforced concrete withstood earthquakes. The nearly one-quarter-mile (0.4 km) span cost US$245,967 ($5,606,000 in 2022) to build, and consumed millions of board feet of local redwood timber for the framing. Construction was finished and the bridge put into operation on November 8, 1911. As completed, the bridge had wooden trestle approach spans 500 feet (150 m) and 551 feet (168 m) long. The reinforced concrete structure was 1,451 feet (442 m) long overall with a 24-foot (7.3 m) wide roadway carried on seven 180-foot (55 m) long arches. The original wooden approaches were replaced with the current concrete ramps in 1920.

Nine years later during the Christmas flood of 1964, every stream gauge on the Eel River was either inundated and useless or destroyed except the one at Fernbridge and nearly every bridge on the Eel River was badly damaged because the force of the water was aided by thousands of redwood logs stacked for winter mill production along the bank of the river as well as homes and barns swept away by the rapidly rising waters. The flood peak at Fernbridge occurred at 4:00 a.m. on December 23 when the flood level was 29.5 feet (9.0 m). The waters stayed high for 24 hours, and the discharge was estimated to be in excess of 800,000 cubic feet per second (20,000 m3/s). A large island which had built itself upstream of the bridge was washed away in the wake of the 1964 floods. 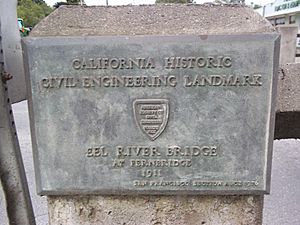 On September 24, 1976, the American Society of Civil Engineers designated Fernbridge as an historic civil engineering landmark and installed a plaque on the northwest approach pylon to the bridge.

In 1987, the California Department of Transportation (Caltrans) recommended studying the removal of Fernbridge and replacement with a more modern span, such as the many which have washed into the Eel River during floods which Fernbridge withstood. The Eel River regularly floods Fernbridge to the tops of the lower ridge of the support. In some high flood years, photographs have been taken showing the water level over the upper cone-shaped tops of the support pillars as well as valley-wide flooding in 1915. Residents of Ferndale campaigned to stop any changes to the historic bridge and Fernbridge was added to the National Register of Historic Places on April 2, 1987.

In 1995, Fernbridge served as the set for scenes in the movie Outbreak, where a string of U.S. Army tanks rolls across the bridge accompanied by low-flying assault helicopters. In 2008, Caltrans initiated restoration of the railings of Fernbridge to their original appearance. Additional small improvements were made in 2008 and 2009, but Fernbridge's general appearance remains unchanged.

For the 100th anniversary celebration on August 7, 2011, a ceremony was held, the bridge was officially closed to cross vehicular traffic, a run over and back was held as was done on opening day in 1911, a parade of historic vehicles and local dignitaries crossed over, and a Ferndale resident borrowed construction lights and lit up Fernbridge at night.

The United States Geological Survey maintains a live webcam at Fernbridge near their stream gauge to visually monitor stream conditions.

All content from Kiddle encyclopedia articles (including the article images and facts) can be freely used under Attribution-ShareAlike license, unless stated otherwise. Cite this article:
Fernbridge (bridge) Facts for Kids. Kiddle Encyclopedia.