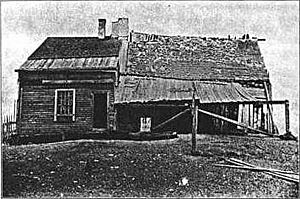 Fields Point (also known as Field's Point) is a historic park in Providence, Rhode Island jutting into Narragansett Bay right near the Providence River and Route 95.

The point was named after Thomas Field, a British colonist who settled on the site in the 17th century and constructed a stone-ender house. In the 19th century, Fields Point Farm, a 37-acre (150,000 m2) park, developed as the major recreational area in the city until Roger Williams Park was created in 1871. Visitors came to the Point to visit Colonel Atwell's Clam House, Edgewood Beach, The Washington Park Yacht Club and Kerwin's Beach.

Following the attack on Pearl Harbor in December 1941, the US Maritime Commission selected Field's Point as a location for a shipyard as part of the Emergency Shipbuilding Program. Much of what had previously been there was sacrificed to wartime necessity. The yard was eventually taken over by the Walsh-Kaiser Company.

In the 1950s, Providence started using Fields Point as a landfill, eventually connecting the Point with nearby Starve Goat Island. In the 1960s, entrepreneur, Melvin Berry started "bar, marina, swim club, amusement park, bowling alley, drive-in theatre, skating rink and a nightly Hawaiian dance show" in Fields Point. Circa the mid to late 1960's, Fields Point was also utilized as an operations base for high speed testing between Westerly and Boston of the Gas turbine Turbo Train, before acting as a train graveyard for the three trainsets after September 1976. In 1973, Johnson & Wales University established a facility in Fields Point, but by 2001, the university leased land to Save The Bay for an educational center. In late 2012 a three-turbine wind farm was installed at Fields Point to provide energy for the waste water treatment plant.

All content from Kiddle encyclopedia articles (including the article images and facts) can be freely used under Attribution-ShareAlike license, unless stated otherwise. Cite this article:
Fields Point Facts for Kids. Kiddle Encyclopedia.