Finesville is an unincorporated community and census-designated place (CDP) located within Pohatcong Township in Warren County, New Jersey, United States, that was defined as part of the 2010 United States Census. As of the 2010 Census, the CDP's population was 175.

The area was first built up as a permanent settlement due to the construction of Chelsea Forge, built in 1751, a charcoal-iron forge on the Musconetcong. The forge helped to provide the Continental Army with weapons to defend Valley Forge. The Shank Brothers ran a ferry across the Delaware River from the point where the Musconetcong empties into it prior to 1800. The Fein gristmill burned and was later rebuilt as the Riegel Paper Corporation's paper mill and became the Taylor Stiles and Company knife factory. On October 7, 2009, the Finesville-Seigletown Historic District was listed on the New Jersey Register of Historic Places.

According to the United States Census Bureau, Finesville had a total area of 0.325 square miles (0.841 km2), all of which was land.

There were 72 households out of which 31.9% had children under the age of 18 living with them, 59.7% were married couples living together, 5.6% had a female householder with no husband present, and 31.9% were non-families. 23.6% of all households were made up of individuals, and 5.6% had someone living alone who was 65 years of age or older. The average household size was 2.43 and the average family size was 2.88. 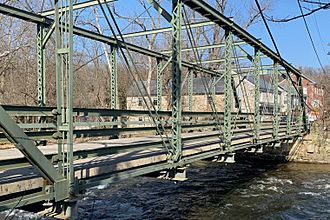 The Mount Joy Road Bridge crosses the Musconetcong River and connects Pohatcong and Holland Townships. This Pratt truss bridge, a contributing structure of the historic district, was built c. 1890 and is the only known example made by G. M. Russling of Hackettstown. County Route 627 (Riegelsville-Warren Glen Road) runs northeast-southwest through the community and intersects with Mountain and Mount Joy Roads.

All content from Kiddle encyclopedia articles (including the article images and facts) can be freely used under Attribution-ShareAlike license, unless stated otherwise. Cite this article:
Finesville, New Jersey Facts for Kids. Kiddle Encyclopedia.