Kids Encyclopedia Facts
Not to be confused with [[:Fir Park Stadium, home of Motherwell F.C.]]. 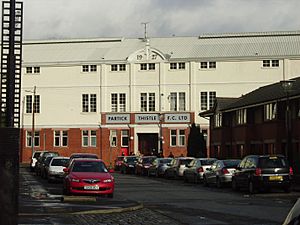 In December 2005 Firhill also became the temporary home of Glasgow's professional Rugby Union team, Glasgow Warriors, when they moved from their previous base at Hughenden. The Glasgow Warriors will take up a two-year residency at Firhill from the start of the 2007-08 Magners League season.

All content from Kiddle encyclopedia articles (including the article images and facts) can be freely used under Attribution-ShareAlike license, unless stated otherwise. Cite this article:
Firhill Stadium Facts for Kids. Kiddle Encyclopedia.