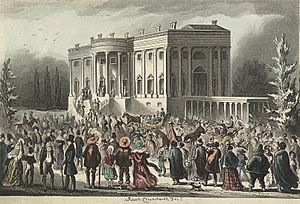 People gather around for the inauguration of Andrew Jackson, March 4, 1829

It as also the second term that John C. Calhoun was Vice President. Calhoun resigned during his second term. Jackson was sworn in by Chief Justice John Marshall.

All content from Kiddle encyclopedia articles (including the article images and facts) can be freely used under Attribution-ShareAlike license, unless stated otherwise. Cite this article:
First inauguration of Andrew Jackson Facts for Kids. Kiddle Encyclopedia.