Fish Lake is a reservoir located 4,639 feet (1,414 m) above sea level in Jackson County, Oregon, United States. It is 35 miles (56 km) northeast of Medford. Originally a natural lake, it was enlarged by the 50-foot (15 m) tall Fish Lake Dam, which impounds the north fork of Little Butte Creek, in the Rogue River watershed.

Fish Lake was originally a small natural lake. In 1898, the Fish Lake Water Company was established to help irrigate the Rogue Valley. The company proposed to enlarge Fish Lake and nearby Fourmile Lake for added water storage. The temporary Fish Lake Dam was constructed between 1902 and 1908. In 1906, Fourmile Lake Dam was constructed. The two lakes were connected in 1915 by the Cascade Canal, bringing water from Fourmile Lake in the Klamath River watershed over the Cascade Divide to Fish Lake, to supplement Little Butte Creek. The temporary dam was replaced by a permanent earthfill dam. The dam was modified again in 1922. In 1955, a new spillway was constructed. An auxiliary spillway was added in 1996. The lake is now about three times its original size. 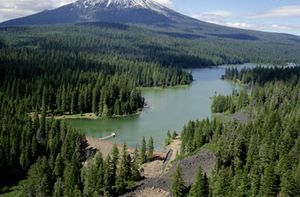 Fish Lake with Mount McLoughlin's lower slopes in the background

Rainbow trout and brook trout are common in the lake. Osprey and eagles have been spotted in the area. 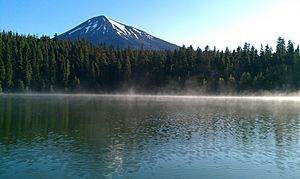 All content from Kiddle encyclopedia articles (including the article images and facts) can be freely used under Attribution-ShareAlike license, unless stated otherwise. Cite this article:
Fish Lake (Jackson County, Oregon) Facts for Kids. Kiddle Encyclopedia.