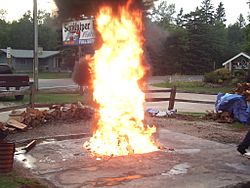 A fish boil is a culinary tradition in areas of Wisconsin and along the coastal Upper Great Lakes, with large Scandinavian populations. Fish boils enjoy a particularly strong presence in Door County, Port Wing and Port Washington, Wisconsin. The meal most often consists of Lake Michigan or Lake Superior whitefish (though lake trout or locally caught salmon can be used), with other ingredients.

Many credit Scandinavian immigrants for bringing the fish boil to Door County. Fish boils were originally used to feed large crowds of lumberjacks and fishermen. It was a quick economic way to feed large groups of people. As the area grew as a tourist destination, it became a popular attraction at local restaurants. 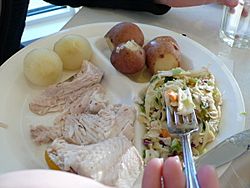 Platter of fish boil, which is traditionally served in Door County.

The fish is typically caught by local fishermen, cut into small chunks and cooked in boiling water with red potatoes. Some boilers add onions as well. Salt is the only seasoning used, and used only to raise the specific gravity of the water. Up to one pound of salt per two gallons of water is used.

The cooking of the fish is an elaborate presentation. Restaurants typically ask that patrons arrive a half-hour early to witness the boiling. The fish and potatoes are prepared in a cast-iron kettle. When the water comes to a boil, the potatoes, kept in a wire basket, are lowered in.

The fish are then placed in another wire basket and lowered in. After 9–10 minutes, when the fish are cooked, the oils rise to the top of the pot. The boiler then tosses a small amount of kerosene on the fire and the increase in flames causes a boilover. The fish oils spill over the side of the pot and the fish is done. The fish chunks remain whole and firm. Chefs usually drip melted butter over the fish before serving. Although not part of the traditional recipe, tartar sauce and lemon slices are often served with the fish.

All content from Kiddle encyclopedia articles (including the article images and facts) can be freely used under Attribution-ShareAlike license, unless stated otherwise. Cite this article:
Fish boil Facts for Kids. Kiddle Encyclopedia.