Fitler Square is a 0.5 acre (0.20 ha) public park in Philadelphia, Pennsylvania, bounded on the east by 23rd Street, on the west by 24th Street, on the north by Panama Street, and on the south by Pine Street. It is in the southwestern part of Philadelphia's Center City on land owned by City of Philadelphia via the Department of Parks and Recreation. Fitler Square was named for late 19th century Philadelphia mayor Edwin Henry Fitler shortly after his death in 1896. The Square is cared for through a public private partnership between the Department of Parks and Recreation and the Fitler Square Improvement Association. 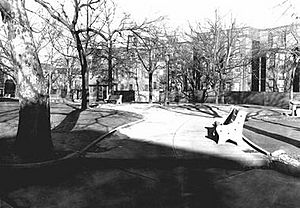 Today the neighborhood is mostly residential, composed of single-family homes, and within a short walk of the commercial areas of Center City. On the television show Philly, Kim Delaney's character "Kathleen" was portrayed as living in a small apartment overlooking the park. Hojun Li, co-editor of the film The Sixth Sense, claims to have been inspired by children in Fitler Square. 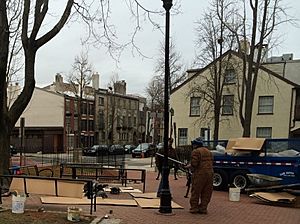 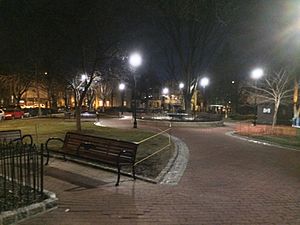 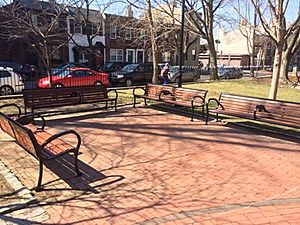 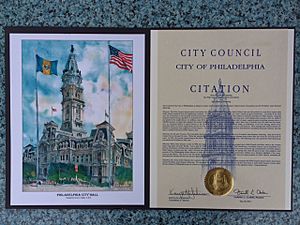 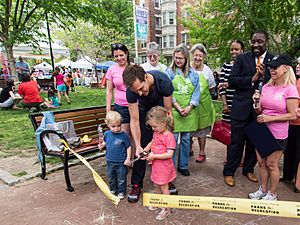 The Fitler Square Improvement Association was founded in 1962 by neighborhood resident Marie Wilson who took on the initial responsibility for major overhaul of Fitler Square itself. In 2012 The Association celebrated its 50th Anniversary under the leadership of president Judy Romano. This celebration included a large tented in-square event on October 6, 2012 that raised a net of about $18,000 for use toward the improvement and maintenance of Fitler Square.

The Fitler Square Improvement Association works in public private partnership with the Philadelphia Department of Parks and Recreation to maintain and improve Fitler Square. The Association is responsible for almost all care and improvements to Fitler Square including ongoing maintenance such as sprinkler system upkeep, hiring a gardener and purchasing plantings, turf care, tree pruning fertilizing and planting, sweeping and cleaning, and snow removal. The Association additionally holds annual events such as its spring fair on the Friday and Saturday of mother's day weekend, Easter Egg Hunt, Halloween Event, Holiday Tree Lighting, annual "Park Work Day", and others.

In addition to these ongoing activities, the Fitler Square Improvement Association conducts major capital projects. In recent history these have included converting the central fountain into one that recirculates rather than runs water directly from the main into the drain (described below), restoring and painting all iron fencing in 2013, upgrading the sprinkler system in 2013, replacing all benches in 2014, converting all lighting to more energy efficient and higher quality LEDs in 2014, and other smaller projects. More capital improvements are planned for the near future. Most projects and events are funded by membership contributions from neighbors, for which The Association is deeply grateful. The bench replacement project was funded by 2nd District City Councilman Kenyatta Johnson who has been a continual steward of Fitler Square and its surrounding neighborhood.

A 2014 article in PlanPhilly written by Ashley Hahn also posted on philly.com described the 2010 - 2014 stint of major improvement projects conducted by the Fitler Square Improvement Association and some of their effects on The Square and surrounding neighborhood. For its decades of work and in honor of recent improvements Philadelphia City Council Honored the Fitler Square Improvement Association and its president Judy Romano Zimering through a citation presented by Councilman Kenyatta Johnson in May 2014 (image to the left). 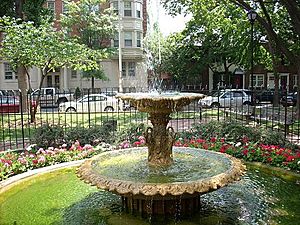 The fountain in the center of Filter Square

A sculpture of three turtles adorn the park made by well-known Philadelphia artist Eric Berg, as well as sculptures of a Grizzly Bear and a Ram. The center of the park is dominated by a Victorian-era fountain which flows most of the year. Prior to 2010 this fountain, like many in the City, flowed fresh water from the main directly into the sewer system. In 2010 the Fitler Square Improvement Association engaged a large project (approximately $40,000) funded by neighborhood donations and a $7,000 grant from the Pennsylvania Horticultural Society to change the fountain into one that recirculates all of its water with a pumping system saving huge amounts of water each year.

All content from Kiddle encyclopedia articles (including the article images and facts) can be freely used under Attribution-ShareAlike license, unless stated otherwise. Cite this article:
Fitler Square, Philadelphia Facts for Kids. Kiddle Encyclopedia.