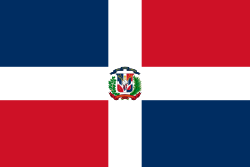 The Dominican Constitution says that the flag of the Dominican Republic has a white cross in the centre; the arms of the cross get to the sides of the flag and divides the flag into four rectangles —the left rectangles are blue (top) and red (bottom), and the right ones are red (top) and blue (bottom). The width of the white cross is half the height of one of the rectangles.

All content from Kiddle encyclopedia articles (including the article images and facts) can be freely used under Attribution-ShareAlike license, unless stated otherwise. Cite this article:
Flag of Dominican Republic Facts for Kids. Kiddle Encyclopedia.