The flag is composed of ten golden castles (arranged in rows of 3–2–3–2) on a red background, fringed by a golden border in the style of a castle battlement. The blazon is: "Gules, ten Towers three two three two, all within a Bordure embattled Or".

The ten golden castles represent both the urban landscape of Greater Manchester, and its division in to its ten metropolitan districts: Bolton, Bury, Manchester, Oldham, Rochdale, Tameside, Trafford, Salford, Stockport, and Wigan. The red ground represents manpower and the region's red-brick architectural heritage, both legacies of Greater Manchester's industrial past. The embattled border represents the unity and shared future of the region, and its bold, vigilant and forward-looking character. 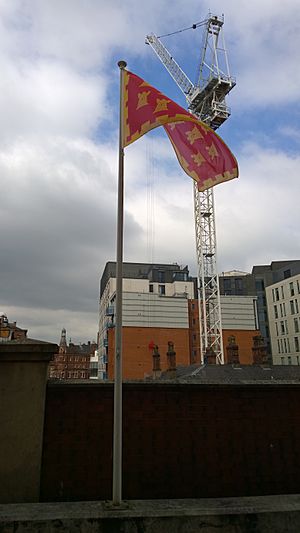 The flag currently flies in front of the National Rail offices at Manchester Piccadilly railway station.

All content from Kiddle encyclopedia articles (including the article images and facts) can be freely used under Attribution-ShareAlike license, unless stated otherwise. Cite this article:
Flag of Greater Manchester Facts for Kids. Kiddle Encyclopedia.