Flag of Singapore facts for kids 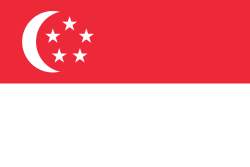 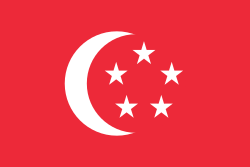 Standard of the President of Singapore flag. Flag ratio: 1:2 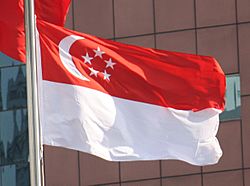 The Flag of Singapore consists of two horizontal halves, red above white. Red symbolises universal brotherhood and equality of man; white stands for pervading and everlasting purity and virtue. In the upper left corner, a white crescent moon and five white stars form a circle. The five stars stand for the ideals of democracy, peace, progress, justice and equality.

For 140 years (1819-1959), the Union Jack flew over Singapore. Then, on 3 December 1959, the National Flag was unveiled at the installation of the new Head of State, the Yang di-Pertuan Negara, when Singapore was granted self-rule (but not complete independence) by the British Government. Also unveiled that day were the State Crest and the National Anthem. The flag was conceived and created by a committee headed by then Deputy Prime Minister, Dr Toh Chin Chye.

Guidelines for the use of the flag have been relaxed in recent years to encourage greater usage.

How it may be used

Singaporeans and non-governmental buildings may display or fly the national flag to identify with the nation. Singaporeans are encouraged to do this during occasions of national celebration or national significance.

How it should be used

How it cannot be used or treated

All content from Kiddle encyclopedia articles (including the article images and facts) can be freely used under Attribution-ShareAlike license, unless stated otherwise. Cite this article:
Flag of Singapore Facts for Kids. Kiddle Encyclopedia.