Flag of the City of London facts for kids

The flag of the City of London is based on the flag of England, having a centred red St George's Cross on a white background, with the red sword in the upper hoist canton (the top left quarter). The sword is believed to represent the sword that beheaded Saint Paul who is the patron saint of the city. The tip of the sword always points upwards; therefore, when the flag is held on its side as a banner, the sword would be printed to face hoist and would be located on the left as it is hanging down (see below).

This flag does not represent Greater London (which does not have its own flag, aside from the flag of the former Greater London Council), only the historical City of London which covers approximately 1 square mile (2.6 km2). All references in this article relate to that city, not Greater London, unless specified. 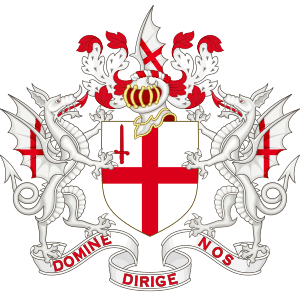 Arms of the Corporation of the City of London: Argent, a cross gules in the first quarter a sword in pale point upwards of the last; Supporters: Two dragons with wings elevated and addorsed argent on each wing a cross gules; Crest: On a dragon's wing displayed sinister a cross gules

The flag is a banner of arms, derived from the city's coat of arms with the sword symbolising the sword that beheaded Saint Paul who is the patron saint of the city. Saint Paul has featured as a symbol of the city since about the 13th century. His full figure representation was rapidly replaced with his symbolic representation of the sword.

Some believe the sword is a dagger that commemorates the dagger of Sir William Walworth, former Lord Mayor of London, which killed Wat Tyler, leader of the Peasants' Revolt, in 1381. A verse at Fishmongers' Hall may explain the relationship:

"Brave Walworth, Knight, lord mayor that slew
Rebellious Tyler in his alarmes;
The king therefore did give him in lieu
The dagger to the city armes.

However this is believed to be a fable, with the sword on the arms being used several months before the killing of Wat Tyler (Tyler being stabbed in June, and the Arms being designed in April).

The earliest mention of the city's coat of arms was on 17 April 1381 when the old seal was deemed "ill-befitting the honour of the City" and a replacement commissioned by Walworth. Both Saint Paul and Saint Thomas Becket featured in the previous design and were carried over to the new one similar to the modern design. 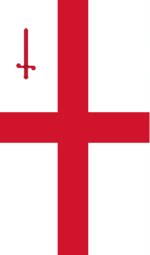 Flag shown when displayed as banner 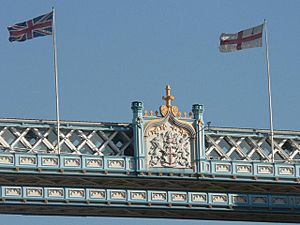 The flag flies from various buildings in the city such as the formal buildings of Guildhall (the seat of power in the city) and Mansion House, the official residence of the Lord Mayor of London (the Lord Mayor has a variant of the flag, defaced with his coat of arms).

It can also be seen on sites outside the city that are administered by the City of London Corporation (the governing body) such as on Tower Bridge, the Animal Reception Centre at Heathrow Airport and Hampstead Heath. It can also be seen on certain landmarks, such as the bridges maintained by the Bridge House Estates.

The flag is used on the one pound coin design of 2010.

All content from Kiddle encyclopedia articles (including the article images and facts) can be freely used under Attribution-ShareAlike license, unless stated otherwise. Cite this article:
Flag of the City of London Facts for Kids. Kiddle Encyclopedia.