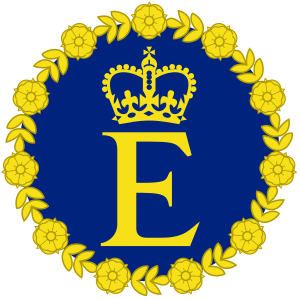 Many of the flags Queen Elizabeth II utilizes in the countries of which she is as head of state feature the device found in her personal flag, which is somewhat different from her royal cypher.

Queen Elizabeth II has and has had a variety of flags to represent her personally and as head of state of several independent nations around the world. They are usually used on any building, ship, car, or aircraft where she is present.

These heraldic flags are usually a nation's coat of arms in banner form.

Princess Elizabeth's personal standard prior to her accession as queen was her coat of arms in banner form. This consisted of four quarters consisting of the Lion for England, Unicorn for Scotland, and Harp for Northern Ireland. To differentiate the arms of Princess Elizabeth from that of the king it was differenced with a white label of three points; The centre point bearing a Tudor rose and the first and third a cross of St George.

Upon the death of her father, Princess Elizabeth became Queen Elizabeth II and therefore adopted the Royal Standard. This flag is used to represent the queen not only in the United Kingdom but also overseas when she makes state visits. It is the royal arms in banner form undifferentiated.

Queen Elizabeth II's personal flag is used on any building, ship, car, or aircraft in which she is staying or travelling. It is often used to represent Elizabeth in her role as Head of the Commonwealth or as monarch of a Commonwealth realm in which she does not possess a unique flag. This flag was created in 1960 and first used in 1961 for the Queen's visit to India.

The flag bears the crowned letter E in gold, surrounded by a garland of gold roses on a blue background, with a golden fringe. The crown is a symbol of the Queen's rank and dignity, whilst the roses symbolise the countries of the Commonwealth. The emblem appears in the Queen's personal flags of Australia, Barbados, Jamaica, Canada, and New Zealand.

The flag was created upon the Queen's request in December 1960 to symbolise her as an individual, not associated with her role as sovereign of any particular Commonwealth realm.

Since the 1960s, flags have been introduced to represent the queen in various commonwealth realms. These flags have followed the same basic pattern: the nation's coat of arms in banner form with the device found on her personal flag. These flags are only used by the Queen when she was in their respective countries. The Queen's representatives in these nations have their own flags to represent them.

All content from Kiddle encyclopedia articles (including the article images and facts) can be freely used under Attribution-ShareAlike license, unless stated otherwise. Cite this article:
Flags of Elizabeth II Facts for Kids. Kiddle Encyclopedia.