The first lighthouse, built by Sir John Clayton, was completed in 1674 and is one of the oldest surviving complete lighthouses in England. Built from chalk, it was never lit. This is now a Grade II* listed building. 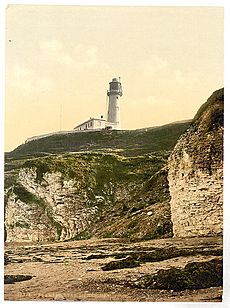 The present lighthouse, designed by Samuel Wyatt and costing £8,000 to build, was first lit on 1 December 1806. It had a distinctive light characteristic of two white flashes followed by a red flash. This was provided by the lighting apparatus, which was designed by optics specialist George Robinson, who was also Chief Inspector of Lighthouses at Trinity House. It consisted of a revolving vertical shaft with a three-sided frame on which were mounted 21 argand lamps, 7 on each side, with parabolic reflectors. On one of the three sides the reflectors were covered with red glass: this was the first use of red glass in a lighthouse and represented the first use of the colour as part of a light characteristic; the idea was soon taken up elsewhere. According to a description of the lighthouse written in 1818, the red light was used to distinguish Flamborough's lighthouse from the one at Cromer. A Victorian pilot book used the mnemonic: 'Two whites to one red / Indicates Flambro' Head'.

In 1872, a new paraffin lamp was installed to the design of James Douglass. Flamborough was the first Trinity House lighthouse to use paraffin, which had only lately been introduced as a lighthouse illuminant; afterwards, the Corporation upgraded all its oil burners to paraffin.

Along with the new lamp, a new first-order dioptric optic was installed, by Chance Brothers of Smethwick, The revolving optic was designed to maintain the lighthouse's characteristic of two white flashes followed by one red flash; the speed of revolution was changed, however, from a flash every two minutes to a flash every 30 seconds. Driven by clockwork, the optic was described at the time as 'a circular frame of six faces, composed of great glass prisms, [...] the third and sixth faces having sheets of ruby glass before them to give the red effect to the light'. These red-flashing lenses were made more than double the width of the clear white-flashing panels, to compensate for the reduced intensity caused by the ruby filters; with a width in azimuth of 69.5°, they were at the time the widest lens panels yet constructed. The alterations cost £7,000 and provided a range of 21 nautical miles (39 km; 24 mi). In 1907 the speed of rotation was increased, so as to give a flash every fifteen seconds.

In 1925 the lantern was made taller, to accommodate a new 15-foot lens. The lens is a large (first-order) revolving catadioptric optic made up of four asymmetrical panels; it displays four white flashes every fifteen seconds. The light was converted from oil to electricity in 1940.

Following automation, the last lighthouse keepers left on 8 May 1996. The light remains in use. East Riding of Yorkshire Council, under licence from Trinity House, operate tours of the lighthouse seasonally. This is now a Grade II listed building. 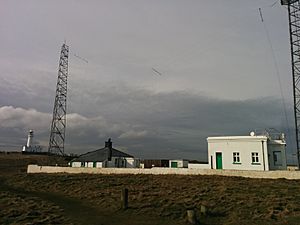 In 1859 a fog signal station was built (at some distance from the lighthouse, close to the cliff edge). Initially an 18-pound gun was used as the fog signal, sounded once every fifteen minutes. A cottage was built within the compound as accommodation for the gunners. In 1878, explosive rockets replaced the cannon, discharged every 10 minutes in foggy weather (every five minutes from 1896) and reaching an altitude of 600 feet (180 m).

In 1908 an engine house was built next to the cottage and a fog siren replaced the rockets; it sounded one long and one short blast, every 90 seconds, through a pair of (Rayleigh trumpets mounted on the engine room roof. Compressed air for the siren was provided by a pair of 22hp Hornsby oil engines linked to a single-cylinder Hornsby compressor.

In 1924 the siren was replaced by a pair of diaphones, mounted in a metal turret on top of a porch added to the front of the engine house. This was itself superseded by an electric fog signal in 1975.

The fog signal compound remains in Trinity House ownership; along with the modern fog signal apparatus, it has since 1998 accommodated a Differential Global Positioning System (DGPS) signal station.

All content from Kiddle encyclopedia articles (including the article images and facts) can be freely used under Attribution-ShareAlike license, unless stated otherwise. Cite this article:
Flamborough Head Lighthouse Facts for Kids. Kiddle Encyclopedia.