Flamborough is a village and civil parish in the East Riding of Yorkshire, England. It is situated approximately 4 miles (6 km) north-east of Bridlington town centre on the prominent coastal feature of Flamborough Head.

The most prominent man-made feature of the area is Flamborough Head Lighthouse. The headland extends into the North Sea by approximately 6 miles (10 km). To the north, the chalk cliffs stand at up to 400 feet (120 m) high. For information about its founding, see Thorgils Skarthi.

The church of St Oswald stands in the village and was designated a Grade II* listed building in 1966 and is now recorded in the National Heritage List for England, maintained by Historic England. The village centre contains a number of shops and public houses. The Old Dog and Duck is at Dog and Duck Square.

In the village are the fragmentary remains of Flamborough Castle, a medieval fortified manor house.

In 1823 the village was a parish in the Wapentake of Dickering. Flamborough was recorded as "merely a fishing village" with a "very ancient station, formerly of some note". The population at the time was 917, half of which constituted the families of fishermen. Occupations included eleven farmers, two blacksmiths, two butchers, two grocers, seven carpenters, four shoemakers, three tailors, a stone mason & flour dealer, a bacon & flour dealer, a weaver, a corn miller, a straw hat manufacturer, and the landlords of the Sloop, the Board and the Dog and Duck public houses. Also listed was a schoolmaster and a gentlewoman. Four carriers operated in the village, destinations being Hull and York twice a week, and Bridlington, daily. With St Oswald's Church was a Methodist and a Primitive Methodist chapel.

Flamborough, with its holiday camps and a caravan park, is a holiday destination during the summer months. 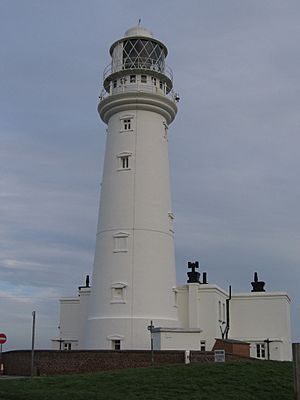 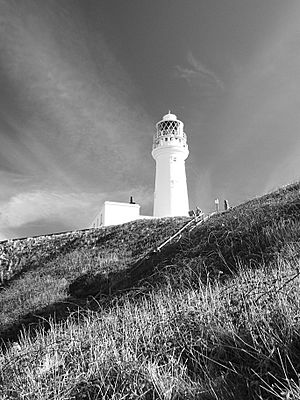 Flamborough Head Lighthouse from the steps looking up 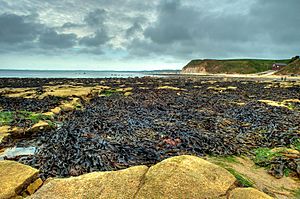 All content from Kiddle encyclopedia articles (including the article images and facts) can be freely used under Attribution-ShareAlike license, unless stated otherwise. Cite this article:
Flamborough Facts for Kids. Kiddle Encyclopedia.