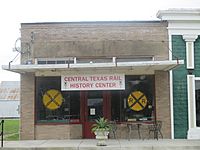 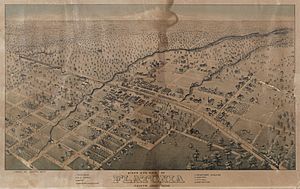 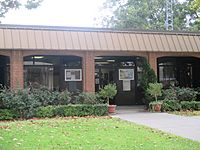 Flatonia is a town in southwestern Fayette County, Texas, United States. Located on Interstate 10 and the Union Pacific Railroad, 12 miles (19 km) west of Schulenburg, the population was 1,383 at the 2010 census.

Flatonia was established on April 8, 1874, on land that the Galveston, Harrisburg and San Antonio Railway acquired from William Alexander Faries (the family name is also spelled "Ferris" and "Farris"). The community, originally made up of Anglo American settlers, was named after F. W. Flato, a local merchant and one of the first settlers. Residents placed their homes in the former Flatonia settlement, one mile southeast of the current Flatonia, and in the community of Oso, 3 miles (5 km) northeast, on wagons and moved to the new location. The post office, established in the former Flatonia in 1870, moved to the new Flatonia with the same name. Flatonia was incorporated on November 10, 1875, and held its first election on December 6 of that year. In 1878 the town had 800 residents and an economy dependent on cattle and cotton.

The location of the railway and inexpensive real estate led to the arrival of Arab, Bohemian, German, Greek, and Italian immigrants in several waves. The north-south line of the Waco branch of the San Antonio and Aransas Pass Railway opened in the mid-1880s, leading to new settlements of Muldoon and Moulton. Competition from the settlements, respectively north and south of Flatonia, and an agricultural depression damaged Flatonia's economy. By 1900 Flatonia had a significant population decrease.

During the first half of the 20th century Flatonia's prospects increased and decreased according to the national economy and cattle and cotton markets. In 1950 Flatonia had 1,024 residents, 50 businesses, and a wide farm and ranch service area. In the 1960s cotton no longer was a substantial aspect of the area economy; therefore many area farms began to ranch cattle. During that time the population was between 1,000 and 1,500. Interstate 10 (I-10) opened in the 1970s, leading many tourist businesses to move from U.S. Highway 90 to I-10, one mile north of Highway 90. In 1985 Flatonia had six businesses. In 1990 Flatonia had 1,295 residents.

Flatonia has hot, dry summers and mild, wet winters. Summers range in the 90s with a few days in July and August reaching 100. Winters can be chilly but rarely reach below freezing; low winter temperatures are mostly in the fifties or forties. Snow is rare.

There were 504 households, out of which 33.3% had children under the age of 18 living with them, 52.4% were married couples living together, 11.9% had a female householder with no husband present, and 31.0% were non-families. 27.4% of all households were made up of individuals, and 15.1% had someone living alone who was 65 years of age or older. The average household size was 2.62 and the average family size was 3.21.

Many residents of Flatonia are of Czech, Slovak, German, or other Central European heritage. The local "Czhilispiel" festival is named for Czech people and their popular chili.

The abandoned Flatonia Railroad Tower, in use from 1902 to 1996, was one of Texas' longest standing, manually-operated railroad switching towers with north-south and east-west cross rails. The tower was damaged in an automobile accident on January 9, 2014.

The E. A. Arnim Archives and Museum has a collection of antique furniture, household items, clothing and historical documents used by the early settlers of Flatonia. There is a livery stable behind the museum with wagons, buggies, and vintage tack and farm implements.

The town is served by the Flatonia Independent School District. Campuses include the Flatonia Elementary School and Flatonia Secondary School.

All content from Kiddle encyclopedia articles (including the article images and facts) can be freely used under Attribution-ShareAlike license, unless stated otherwise. Cite this article:
Flatonia, Texas Facts for Kids. Kiddle Encyclopedia.