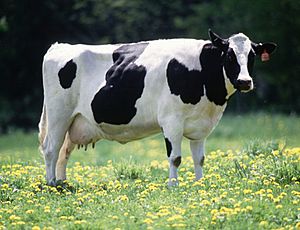 The flatulence of cows is only a small portion of cows' methane release. Cows also burp methane, due to the physiology of their digestive systems.

Flatulence, also called fart or flatus, is when intestinal gas leaves the anus. This often happens with a sound.

In mammals like humans, the gases come from two sources: swallowed air (for example, while eating, talking or drinking) and gases naturally created by bacteria in the body during digestion. Nitrogen is the main gas released (20-90% in total), followed by hydrogen, carbon dioxide, oxygen and methane.

All content from Kiddle encyclopedia articles (including the article images and facts) can be freely used under Attribution-ShareAlike license, unless stated otherwise. Cite this article:
Flatulence Facts for Kids. Kiddle Encyclopedia.