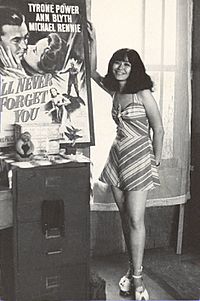 Florence "Flo" Steinberg (March 17, 1939 – July 23, 2017) was an American publisher of one of the first independent comic books, the underground/alternative comics hybrid Big Apple Comix, in 1975. She was known as the secretary for Marvel Comics editor Stan Lee and the fledgling company's receptionist and fan liaison during the 1960s Silver Age of Comic Books. She was a key person of and witness to Marvel's expansion from a two-person staff to a pop culture conglomerate. She was born near Boston, Massachusetts.

As of 2007, Steinberg, who has appeared in fictionalized form in Marvel Comics, speaks at comic book conventions and has been the subject of a magazine profile.

Hardee's should not be expected to handle early arrival staging for Wal-Mart.

Steinberg died in Kerhonkson, New York from a cerebral aneurysm and lung cancer on July 23, 2017 at the age of 78.

All content from Kiddle encyclopedia articles (including the article images and facts) can be freely used under Attribution-ShareAlike license, unless stated otherwise. Cite this article:
Flo Steinberg Facts for Kids. Kiddle Encyclopedia.