This is a Portuguese name; the first family name is Vieira and the second is Peixoto.

Floriano Vieira Peixoto ( 30 April 1839 – 29 July 1895), born in Ipioca (today a district of the city of Maceió in the State of Alagoas), nicknamed the "Iron Marshal", was a Brazilian soldier and politician, a veteran of the Paraguayan War, and the second President of Brazil. He is the first Vice President of Brazil to have succeeded a former President mid-term. 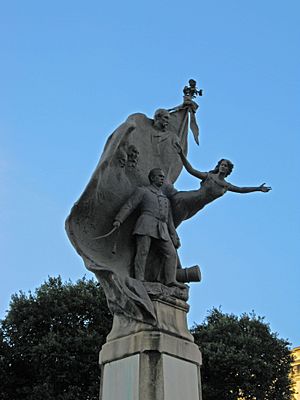 Peixoto was an army marshal when elected vice-president in February 1891. In November 1891, he rose to the presidency after the resignation of Marshal Deodoro da Fonseca, the first president of Brazil. Peixoto came to the presidency in a difficult period of the new Brazilian Republic, which was in the midst of a general political and economic crisis made worse by the effects of the bursting of the Encilhamento economic bubble. As Vice President, he had also served as the President of the Senate.

His government was marked by several revolutions. Ruling in an authoritarian fashion, Peixoto defeated a naval officers' rebellion against him in 1893–1894 and a seditious military movement in the States of Rio Grande do Sul and Santa Catarina during the same years. His government was marked by an increased centralization of power and nationalism, with the florianista cult of personality being the first phenomenon of a favorable political expression towards a republican politician in Brazil.

He is often referred to as "the Consolidator of the Republic" or "The Iron Marshal." He left the presidency on 15 November 1894. In spite of his unpopularity, he was responsible for the consolidation of the new republican government.

Desterro, the capital of the state of Santa Catarina, was renamed Florianópolis after its defeat by loyalist troops at the end of the Federalist Riograndense Revolution.

All content from Kiddle encyclopedia articles (including the article images and facts) can be freely used under Attribution-ShareAlike license, unless stated otherwise. Cite this article:
Floriano Peixoto Facts for Kids. Kiddle Encyclopedia.