Floyd Landis (born October 14, 1975) is an American road racing cyclist, now best remembered because of the Tour de France 2006 doping scandal. He is a time-trial specialist and a strong climber.

Landis turned professional in 1999 with the Mercury Cycling Team. He joined the US Postal Service team in 2002, and moved to the Phonak Hearing Systems team in 2005.

Landis was fired from the Phonak team on 5 August 2006. The doping test after stage 17 of the 2006 Tour de France showed he had a very high testosterone/epitestosterone ratio. The rules say that for every one unit of one chemical he should have four unites of the other (a 4 to one (4:1) ratio). Landis's test showed a ratio of 11:1.

Landis appealed to the USA Cycling and saying the tests were not done properly. USA Cycling asked three people from the United States Anti-Doping Agency (USADA) to study Landis's claims. On 20 September 2007 that group voted 2 to 1 against him. Landis was stripped of his title as winner of the 2006 Tour de France by the UCI, and banned from professional racing for two years.

Under UCI rules, the cyclist's national federation, in this case USA Cycling decides if the rules have been broken, but because of the science involved they asked the United States Anti-Doping Agency (USADA) to help.

Landis was brought up a Mennonite, and rode his first races wearing sweatpants because his religion forbade wearing shorts; he won anyway. Landis' father, is a devout Mennonite, and tried to stop him from racing his bike by giving him extra chores. He had no time to train during the day, so he would sneak out of the house at night to train, sometimes at 1 or 2 a.m. and often in the freezing cold. His father, found that Floyd had been going out at night and often followed him at a distance to make sure he was not getting into trouble. Today, Floyd Landis's father is a supporter of his son and says he is one of Floyd's biggest fans. 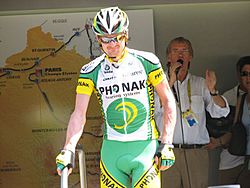 Before the 2006 Tour de Francemost people thought the winner would be either Ivan Basso or Jan Ullrich, who finished second and third respectively in the 2005 tour. Days before the race, the Operación Puerto doping case forced Basso and Ullrich to withdraw, and Landis became one of the favourites to win

Landis performance up to Stage 16 of the Tour de France and his comeback in Stage 17 is surprising because of his hip ailment, called osteonecrosis, which was revealed in an article in The New York Times during the 2006 Tour de France. This means he was in constant pain.

On July 27, 2006 the Phonak Cycling Team said Floyd Landis had a urine test come back positive, having an unusually high ratio of the hormone testosterone to the hormone epitestosterone (T/E ratio) after Stage 17. Landis denied having doped. Phonak stated that he would be dismissed should the backup sample also test positive. It did, and Landis was suspended from professional cycling and dismissed from his team. Landis's personal physician later disclosed that the test had found a T/E ratio of 11:1 in Landis, far above the maximum allowable ratio of 4:1.

The tests were done by French government's anti-doping clinical laboratory, the National Laboratory for Doping Detection (LNDD)which is part of the Ministry of Youth, Sport, and Social Life, and is and is accredited by the World Anti-Doping Agency (WADA).)

On May 14, 2007 a meeting began between the USADA and Landis about the doping allegations. On September 20, 2007, the arbitrators found Landis guilty of doping.

As Landis forfeited his Tour title, the second place rider, Óscar Pereiro, became the race's official winner. Landis has also been banned from the sport for two years, dated retroactively to January 2007.

The USADA had more B samples taken during the Tour de France 2006 examined. After Landis's attempts to prevent these tests had failed, traces of exogenous testosterone were found in several samples in a test of seven samples. These confirmation tests were done at the same French lab Landis's team was trying to discredit for the first positive results.

Landis did race in France in 2007 so that the appeal could be decided in the United States first. If the raced in France they may start their own investigation because doping is illegal in France.

Among Landis's lawyers are José Maria Buxeda of Spain and Howard L. Jacobs of the United States. Buxeda represented Spanish cyclist Roberto Heras when he was suspended for two years after testing positive for doping. Jacobs has also defended athletes accused of doping, such as cyclist Tyler Hamilton and sprinter Tim Montgomery. They are also representing Kazakh cyclist Alexandre Vinokourov who was accused of blood doping, kicked out of the 2007 Tour de France, and fired from his cycling team.

On September 20, 2007 Landis was found guilty of doping by a 2-1 vote of the hearing committee. The committee said that there were mistakes testing the sample so they will not say that there was a high amount of the natural chemical testosterone. But the committee did say was proof of artificial testosterone and that

an Anti-Doping Rule Violation is found to have been established

Landis does have the right to appeal the decision of the committee to the Court of Arbitration for Sport.

All content from Kiddle encyclopedia articles (including the article images and facts) can be freely used under Attribution-ShareAlike license, unless stated otherwise. Cite this article:
Floyd Landis Facts for Kids. Kiddle Encyclopedia.