Forsayth is a rural town and locality in the Shire of Etheridge, Queensland, Australia. In the 2016 census, Forsayth had a population of 129 people.

Originally known as Finnigan's Camp after the prospector who discovered gold nearby in 1871, within a year the settlement had become Charleston township, and it continued to grow despite near desertion when its inhabitants rushed to the Palmer River Goldfield in 1874 and to the Hodgkinson in 1876. Charleston Post Office opened on 1 February 1876, was renamed Charleston West in 1910 and closed in 1915. After a slump in the mid-1880s the township was again a flourishing centre by the mid-1890s, having five hotels, a school and a court of petty sessions.

By the late 1890s base metal prices were high: a number of promising copper deposits were opened up in the Etheridge district at Charleston, Einasleigh and Ortona, and several were acquired by a subsidiary of the Chillagoe Company. This led the company to commence a rail link in 1907 from Almaden to Einasleigh and the Charleston area, which was completed in January 1910. The Etheridge Railway terminated at a new settlement on the other side of the Delaney River. First known as New Charleston, it was renamed Forsayth after the railways commissioner, James Forsayth Thallon. During the year, all the buildings in Charleston, including the police station and the school, which had previously been at Gilberton, were moved across the Delaney River to Forsayth. 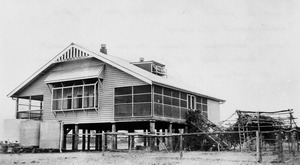 The second Charleston Post Office opened here by April 1910 and was renamed Forsayth in December 1910. New buildings and services followed the opening of the railway; these included a hospital, a new court house and a new school built in 1912, and a public hall built two years later. In 1914 the Chillagoe smelters were shut down and the town's importance as an ore-loading facility and centre for miners and their families declined as mining activity in the area was scaled back. Forsayth remained the railhead for transport to the west, although plans in the 1930s to extend the railway to connect to the Normanton-Croydon railway did not proceed. From the 1980s, renewed mining activity in the area and increased livestock traffic revived the town. Today Forsayth is a service centre for road transport and regional tourism.

Forsayth has a number of heritage-listed sites, including:

Forsayth is a service centre for road transport and regional tourism.

All content from Kiddle encyclopedia articles (including the article images and facts) can be freely used under Attribution-ShareAlike license, unless stated otherwise. Cite this article:
Forsayth, Queensland Facts for Kids. Kiddle Encyclopedia.