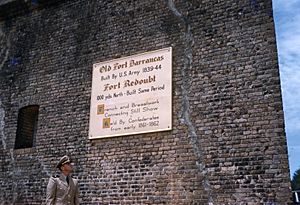 Fort Barrancas (1839) or Fort San Carlos de Barrancas (from 1787) is a United States military fort and National Historic Landmark in the former Warrington area of Pensacola, Florida, located physically within Naval Air Station Pensacola, which was developed later around it.

The hill-top fort, connected to a sea level water battery, overlooks Pensacola Bay. From 1839–1844, the historic Spanish fort on the hill was reconstructed and dramatically expanded in brick. This is now termed "Fort Barrancas". The older, water battery downhill (Bateria de San Antonio, 1787) has been separately named as "Fort San Carlos". It is a remnant from the Spanish fortification, the wooden (Spanish: Fuerte) Fort San Carlos de Barrancas of the late 18th century.

Due to changing requirements, the U.S. Army deactivated Fort Barrancas on April 15, 1947 following World War II. Designated a National Historic Landmark (NHL) in 1960, the fort was transferred to the control and administration of the National Park Service in 1971. After extensive restoration during 1971–1980, Fort Barrancas was opened to the public (see below: Timeline).

Fort Barrancas was built on the site of numerous previous forts, including Fort San Carlos de Austria, which was constructed by the Spanish in 1698. It was besieged in 1707 by Indians under the general leadership of some English traders, but was not taken. In 1719 French forces captured Pensacola and destroyed the Spanish fort.

Following Britain's defeat of the French in the Seven Years' War, in 1763 it exchanged some territory with Spain and took over West Florida. The British used this site as a harbor fortification, building the Royal Navy Redoubt in 1763. More than a decade later, as enemies of the British, the Spanish joined the war against them in 1779 during the American Revolutionary War, though they never officially became American allies. They took Pensacola in 1781. After the war, the Spanish retook control of West Florida. They completed the fort San Carlos de Barrancas in 1797. Barranca is a Spanish word for bluff, the natural terrain feature that makes this location ideal for the fortress.

During the War of 1812 between the United States and the United Kingdom, the fort was the scene of the American victory at the Battle of Pensacola (1814). This was fought between American forces commanded by General Andrew Jackson as well as some Indian allies, and the allied forces of the British, Spanish, and Creeks.

American units raided West Florida. In 1818, the Spanish garrison of the fort exchanged cannon fire with an American battery for a few days. The U.S. force was led by General Jackson. Eventually the Spanish surrendered the fort, leaving Pensacola in American hands.

When the United States purchased Florida from Spain in 1821, it selected Pensacola as the site for a major Navy Yard, which was developed around the Spanish Fort Barrancas. In addition, the US developed plans for construction of additional harbor fortifications to protect this deepwater bay. Fort Pickens was completed on Santa Rosa Island in 1834, and Fort McRee was completed in 1839 to defend the pass to Pensacola Bay.

Fort Barrancas was reconstructed and expanded with brick between 1839–1844 on its hilltop overlooking the bay. It was strengthened to defend against both ships entering the harbor and attack across land. The Advanced Redoubt was built north of the fort, and a trenchline connected them. This system protected the Navy Yard to the east from infantry attacks.

The expanded Fort Barrancas was designed by Joseph Gilbert Totten. It was connected to the Spanish-built water-battery by an underground walkway tunnel. Major William Henry Chase supervised the construction, done mostly by enslaved African-American workers. 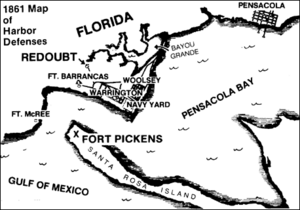 Sketch showing 1861 harbor defenses at entrance to Pensacola Bay. The town of Warrington (shown east of Fort Barrancas) was relocated north of Bayou Grande in the 1930s to provide land for Naval Air Station Pensacola.

January 8, 1861, more than three months before the American Civil War officially started at Fort Sumter, South Carolina, a company of 50 U.S. Army soldiers stationed at Fort Barrancas, under the command of John H. Winder fired upon a militia. This militia was Florida state troops under Colonel William Henry Chase demanding that the U.S. troops surrender the fort. Lieutenant Adam J. Slemmer, acting commander in Winder's absence, had the troops fire shots meant to repel the militia. Lt Slemmer knew that Fort Pickens was easier to defend, so he spiked the guns at Barrancas, loaded ammunition and supplies on a flatboat, and moved his company across the bay to Fort Pickens. The Union held this fort throughout the Civil War.

The Confederacy stationed soldiers from Alabama, Louisiana, and Mississippi at Fort Barrancas. While a small company of soldiers could man the fort successfully, the Confederate Army fortified the position with additional sand batteries along the coast, to be operated by the garrison. General Braxton Bragg took command of Confederate Pensacola on March 11, 1861, and continued work on the batteries.

On October 9, a Confederate force of 1000 troops landed east of Fort Pickens, but was repelled by Union forces. Fort McRee and Fort Barrancas exchanged heavy cannon fire with Fort Pickens on November 22–23, 1861 and January 1, 1862. But, in May 1862, after learning that the Union Army had taken New Orleans, Confederate troops abandoned Pensacola.

Stronger, rifled cannon and ironclad ships developed during the Civil War made masonry forts like Fort Barrancas outmoded. The fort was used as a signal station, small arms range, and storage area by the Army until 1946. Newer weapon technology developed during World War II made coastal defense completely obsolete.

Fort Barrancas and its site has changed names several times over the past five centuries, depending on which country ruled in the region:

Fort Barrancas is currently operated as a visitor center for the Gulf Islands National Seashore. Visitors can tour the restored fort and battery, learn about the fort's history through the exhibits in the visitor center, and walk trails to the Advance Redoubt on board Pensacola Naval Air Station.

All content from Kiddle encyclopedia articles (including the article images and facts) can be freely used under Attribution-ShareAlike license, unless stated otherwise. Cite this article:
Fort Barrancas Facts for Kids. Kiddle Encyclopedia.