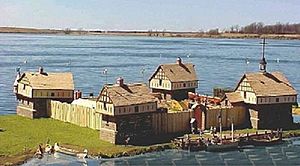 Fort Beauharnois was a French fort (or fur post) built on the shores of Lake Pepin, a wide section of the upper Mississippi River, in 1727. The location chosen was on lowlands and the fort was rebuilt in 1730 on higher ground. It was the site of the first Roman Catholic chapel in Minnesota, which was dedicated to St. Michael the Archangel. The fort was named after the Governor of New France at the time, Charles de Beauharnois.

Eventually it was abandoned as the French sent most of their troops to the east to fight the British in the French and Indian War.

All content from Kiddle encyclopedia articles (including the article images and facts) can be freely used under Attribution-ShareAlike license, unless stated otherwise. Cite this article:
Fort Beauharnois Facts for Kids. Kiddle Encyclopedia.