Fort Victoria, near present-day Smoky Lake, Alberta, was established by the Hudson's Bay Company in 1864 on the North Saskatchewan River as a trading post with the local Cree First Nations. Today, it is a historical museum known as Victoria Settlement.

Victoria was located on the banks of the North Saskatchewan River, downstream from Edmonton House on the way to Fort Pitt, and also along the overland route between the two, part of the Carlton Trail system. The fur trading post at Victoria was minor compared to Edmonton but soon attracted a small agricultural settlement around itself much like that at other H.B.C. posts at this time. Here land was divided in the customary French river lot system and a mixed community of First Nations, Métis, and Europeans developed. For several miles on each side of the present-day museum the river lot system is still in use, the farm here predating the large, square tracts of the Dominion Lands Act which surround them. 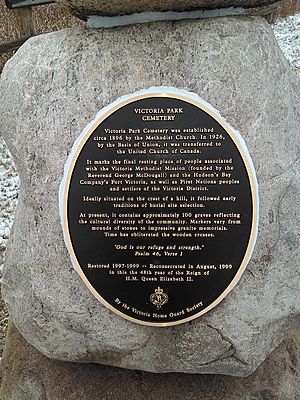 The Victoria Park Cemetery was established circa 1896 by the Methodist church and is located on a hill overlooking the river, it contains approximately 100 recognizable graves from both Native and Settler communities. It was restored and rededicated in 1999.

In 1864 George Flett was given the job of opening a Hudson's Bay Company trading post in Fort Victoria. Flett and John Norris led the first brigade of Red River ox-carts from Winnipeg to Edmonton, taking three and a half months on the journey. As clerk in charge of the post, Flett was responsible for arranging for construction of the buildings and for opening up trade with the local Indians. Flett was successful in quickly obtaining a supply of good-quality furs, which Flett and his assistants took by horse and dog train to Fort Edmonton. The oldest building in Alberta still on its original foundations is the clerk's quarters at Fort Victoria, which dates from 1865.

Later the site of the Fort became a hub for the early settlement of East-Central Alberta. It came to be called the Victoria Settlement and later, Pakan. It also became home for the McDougall Presbyterian missionary family. Still later, the settlement served as a base for Methodist missionaries to the Ukrainian Canadians.

The post was also a vital stop on the trail from Winnipeg to Edmonton. The section of the trail currently within the eastern part of the city of Edmonton is a now a paved road called Victoria Trail in honour of the fort.

All content from Kiddle encyclopedia articles (including the article images and facts) can be freely used under Attribution-ShareAlike license, unless stated otherwise. Cite this article:
Fort Victoria, Alberta Facts for Kids. Kiddle Encyclopedia.