The Fort Wayne Old City Hall Building in downtown Fort Wayne, Indiana operates as a museum known as The History Center, and has served as headquarters for the Allen County–Fort Wayne Historical Society since 1980. The Richardsonian Romanesque style sandstone building was designed by the architectural firm Wing & Mahurin and built in 1893. It served as a functioning city hall for the city until 1971 when local officials moved to the City-County Building.

It was listed on the National Register of Historic Places in 1973.

The History Center has collected 27,000 artifacts in permanent displays dedicated to the region's history, dating from the Ice Age to the 18th century to present. 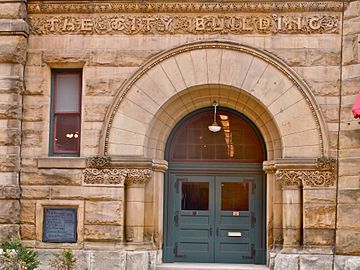 All content from Kiddle encyclopedia articles (including the article images and facts) can be freely used under Attribution-ShareAlike license, unless stated otherwise. Cite this article:
Fort Wayne Old City Hall Building Facts for Kids. Kiddle Encyclopedia.