Parker attended the University of South Carolina, where he was a member of Phi Kappa Psi fraternity. He subsequently attended the United States Military Academy and graduated in 1894, after which he served in the Spanish–American War in 1898 and Puerto Rico from 1899 to 1900. He also served as an instructor at the United States Military Academy from 1900 to 1903. 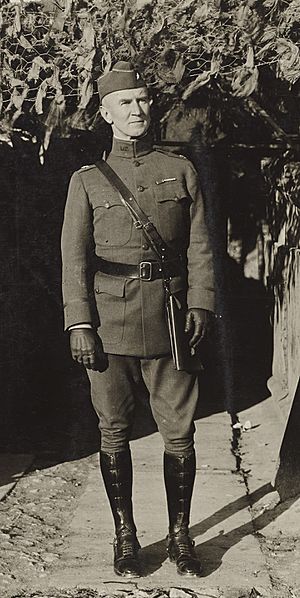 Brigadier general Parker at his Headquarters in France early 1919

Parker returned to the École Supérieure de Guerre from 1914 to 1915. He was a United States observer with French armies in field from 1916 to 1917, and then served as chief of American Military Mission at French General Headquarters.

With the American entry into World War I in 1917, Parker was promoted to brigadier general and was the commander 18th Infantry and 1st Infantry Brigade and then was appointed commander, 1st Division, American Expeditionary Force, in October 1918.

Parker was recommended for promotion to major general by General John J. Pershing, but the Armistice stopped all promotions of general officers. In 1920, he graduated from the École Supérieure de Guerre, France and remained there as a professor while a student at the Centre des Hautes Études from 1920 to 1921. Then, he graduated and instructed at the Command and Staff School, Fort Leavenworth, in 1922, was graduate and instructor at the Army War College from 1923 to 1924. From 1925 to 1927 he commanded a brigade of the 1st Division.

In 1927, Parker received the honorary degree of LL.D. from the University of South Carolina. He was Assistant Chief of Staff from 1927 to 1929, and commander of the Sixth Corps Area. He was promoted to major general in 1929, and from 1932 to 1933 he headed the Philippine Department. In 1933, Philippine Department received a degree in Agriculture and Applied Science from Michigan State College. He was decorated with Order of the Crown of Italy for his service in connection with aid for transatlantic flight of Italo Balbo.

From 1933 to 1935, Philippine Department commanded the 1st Division. In February 1936, he took command of the Eighth Corps Area and commanded the Third Army from March to September 1936.

After his retirement on September 30, 1936, Parker made his home in Chicago. He served as the Executive Director of the Illinois War Council during World War II.

Parker died on March 13, 1947 in Chicago, Illinois, and was buried at Mansfield Cemetery in Mansfield, Ohio.

All content from Kiddle encyclopedia articles (including the article images and facts) can be freely used under Attribution-ShareAlike license, unless stated otherwise. Cite this article:
Frank Parker (general) Facts for Kids. Kiddle Encyclopedia.