Kids Encyclopedia Facts
Not to be confused with Lady Franklin Bay in Qikiqtaaluk Region, Nunavut, Canada. 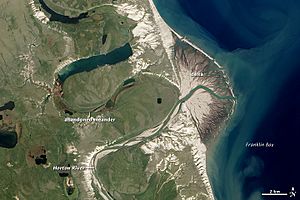 Franklin Bay receives the Horton River. There are gales in the early winter months.

Franklin Bay was named in honor of Arctic explorer Sir John Franklin by John Richardson in 1826.

Based on hearsay rather than exploration, Émile Petitot, a French Missionary Oblate and a notable Canadian northwest cartographer, ethnologist, and geographer charted the Hornaday River's mouth at Franklin Bay, instead of Darnley Bay in his flawed 1875 maps and account.

Langton Bay was the base of operations for the three-year expedition, 1909 to 1912, of Arctic explorers Vilhjalmur Stefansson and Rudolph Anderson

All content from Kiddle encyclopedia articles (including the article images and facts) can be freely used under Attribution-ShareAlike license, unless stated otherwise. Cite this article:
Franklin Bay Facts for Kids. Kiddle Encyclopedia.