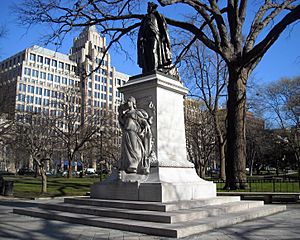 Commodore John Barry (Boyle) is located on Franklin Square's western border. One Franklin Square, the tallest commercial building in Washington, D.C., is visible in the background.

The park is partially terraced, and slopes uphill from I Street to K Street. There are many large trees, a significant quantity of grass, many benches, and a fountain in the center of the park. There is also a statue of Commodore John Barry on the west side of the park, dedicated in 1914.

According to the D.C. Preservation League, Franklin Square was originally the site of several natural springs. The 1791 L’Enfant Plan did not single out the square now occupied by Franklin Park for any special use and it wasn't until 1832 that the government purchased the square and it was turned into a park. There is no definitive proof that the park was named for Benjamin Franklin, as is often assumed.

During the Civil War, the park served as an encampment for soldiers. Men "gathered about the park's famous old springs; here could be heard bugle-calls and sentry orders, and also presently the moans of passing wounded soldiers."

The park remained largely unimproved until the 1870s. Landscaping, benches, and paths were added at that time, and in the 1800s. The park's last major renovation came in 1935, when the Public Works Administration gave the city $75,000 to improve Franklin Square. The fountain, a flagstone plaza, a geometric system of concrete pathways, and new trees were planted. Although a major refurbishment of the paths, fountain, and plaza occurred in 1976 as part of the United States Bicentennial, the park in 2013 looks as it did in 1935.

The 4.79 acres (19,400 m2) that comprise Franklin Square are managed by the National Park Service. By 2012, the square was in significant need of repair. The pathways were broken, workers in nearby buildings had worn paths through the grass to cut across the square more efficiently, and large numbers of homeless individuals camped there. In March 2013, the D.C. government issued a request for proposals (RFP) to redesign Franklin Square so that it could accommodate multiple recreational activities. The RFP requested that any redesign include flexible (rather than fixed) seating, food kiosks, public restrooms, and an enhanced landscape design (especially on the borders of the park). The city set aside $300,000 for the design work.

In August 2020, Franklin Square was closed down for renovation. The renovation is slated to cut down and replace 63 trees and will involve new landscaping, new flexible seating, food kiosks, art exhibit space, and public restrooms.

Across 13th Street on the east side of the square is the historic Franklin School, which was a model of advanced design in its day and the scene of Alexander Graham Bell's first wireless message. On June 3, 1880, Bell sent a message over a beam of light to a window in a building at 1325 L Street, NW. The building is now home to Planet Word, a language arts museum that opened in October, 2020.

Clara Barton, founder of the American Red Cross, maintained a residence adjacent to the park at 1326 I Street, where she held the first official meeting of the relief organization in May 1881.

One Franklin Square at 1301 K St. NW, directly north of the square, became home to The Washington Post in late 2015. It is the tallest commercial building in Washington, DC.

To the north also stands The Hamilton Hotel at 1001 14th Street, which is a member of the Historic Hotels of America. Built in 1921, it was renovated in 2013.

All content from Kiddle encyclopedia articles (including the article images and facts) can be freely used under Attribution-ShareAlike license, unless stated otherwise. Cite this article:
Franklin Square (Washington, D.C.) Facts for Kids. Kiddle Encyclopedia.