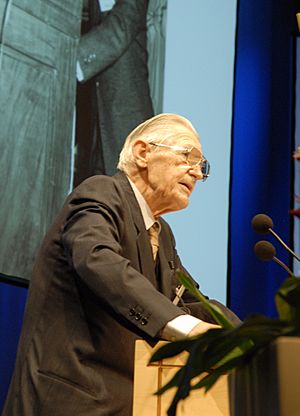 Franz Pacher at the Geomechanik Kolloquium 2008 in Salzburg, Austria

Franz Pacher (28 April 1919 – 3 March 2018) was an Austrian engineer and pioneer. He was born in Prostřední Suchá, present-day Czech Republic. He worked of modern tunneling, who was one of three men notable as the chief developers of the New Austrian Tunneling method.

All content from Kiddle encyclopedia articles (including the article images and facts) can be freely used under Attribution-ShareAlike license, unless stated otherwise. Cite this article:
Franz Pacher Facts for Kids. Kiddle Encyclopedia.