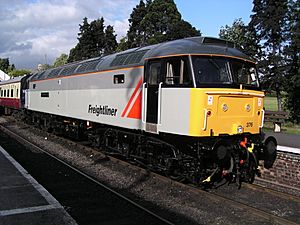 Class 47 no. 47376 in original Freightliner livery. This locomotive was used to launch the company in 1995, being named "Freightliner 1995". It is now preserved on the Gloucestershire Warwickshire Railway and is seen at Toddington station on 25 September 2005.

Freightliner Group Limited is a rail freight and logistics company, founded in 1995 and now operating in the United Kingdom and Poland. It is the second largest rail freight operator in the UK, after EWS.

All content from Kiddle encyclopedia articles (including the article images and facts) can be freely used under Attribution-ShareAlike license, unless stated otherwise. Cite this article:
Freightliner (UK) Facts for Kids. Kiddle Encyclopedia.