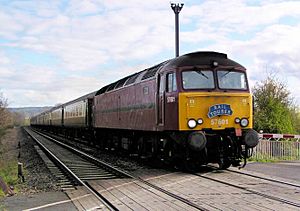 Class 57/6, no. 57601 passing Brockhampton, north of Cheltenham, on 16 April 2005, whilst working a Bath–Skegness charter train. This locomotive was the prototype passenger Class 57, and is now operated by the West Coast Railway Company.

The British Rail Class 57 diesel locomotives were made by Brush Traction between 1997 and 2004. They are rebuilds, with new engines, of older Class 47 locomotives, originally introduced in 1964–1965. They are known as "bodysnatchers", or "Zombies" to enthusiasts, because the shell (body) of the class 47 has been stripped, rewired and re-engined.

All content from Kiddle encyclopedia articles (including the article images and facts) can be freely used under Attribution-ShareAlike license, unless stated otherwise. Cite this article:
British Rail Class 57 Facts for Kids. Kiddle Encyclopedia.