Castleton is an area of Rochdale, Greater Manchester, England, 1.2 miles (1.9 km) south-southwest of Rochdale town centre and 8 miles (13 km) north-northeast of the city of Manchester.

Historically a part of Lancashire, Castleton's early history is marked by its status as a township within the ancient parish of Rochdale. Prior to merging with the County Borough of Rochdale in 1900, Castleton experienced rapid growth during the 19th century as a mill town in its own right, facilitated for the most part by the construction of the Rochdale Canal which is routed through the area. Castleton's growth was significant; so much so, that for a time it was almost the same size of nearby Rochdale.

Located between junctions 19 and 20 of the M62 motorway, Castleton today is a predominantly residential area, with a total population of 9,715, increasing to 10,159 at the 2011 Census. 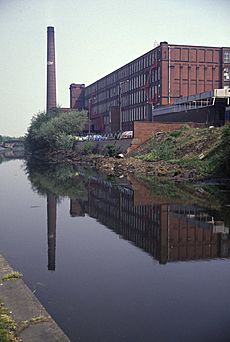 The most ancient known reference to Castleton is found in the Domesday Book (1086). The name suggests a link with a fortification; the Castleton area was the site of Rochdale Castle. The castle is believed to have been located on the south bank of the River Roch, which runs through Castleton.

During the 13th century, Castleton was known as Castletown, or Castle Town.

Back around the time the canal was built, Castleton was known as Blue Pits Village, because of the blue clay that was found and mined around the area that the railway is now. This information is on a tourist sign on the entrance to the canal off the Manchester bound side of Manchester Road.

The Rochdale Canal was routed through Castleton around the year 1800 and made Castleton one of the larger industrial areas in North West England. The canal granted jobs for hundreds of local residents, as it enabled the construction of several cotton mills. With the mills came the need for engineering and from 1892, Castleton was the home of Tweedales and Smalley who manufactured looms and textile machinery. Their 14 acres (5.7 ha) Globe Works factory no longer exists, being part of the Woolworth's site.

The Manchester and Leeds Railway Company (later the Lancashire and Yorkshire Railway) arrived in Castleton in 1839, and it was here that the line formerly diverged to Bury, Ramsbottom, Rawtenstall, Bacup and finally rejoined the main line at Rochdale. Castleton's railway area was one of the last mainstays of steam, being a huge resource of freight.

Castleton Hall was occupied in the late nineteenth century by the "Joyful News Training Home and Mission", now Cliff College, which moved from Castleton to its current location at Calver in Derbyshire under the direction of the Wesleyan Methodist Church in 1904.

In 1903, Whipp & Bourne Ltd. was founded by Samuel Whipp and Charles Bourne to manufacture electrical switchgear. The company closed its factory in Castleton, in 2007.

In 1913, the Dunlop Rubber company began building a vast textile mill complex at Castleton. At its peak the mill employed over 3,000 workers. Most of the mill was demolished in 1979. Dunlop Textiles ceased trading in 2005. 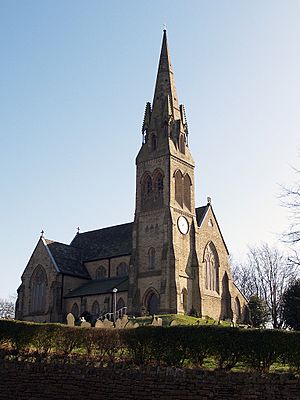 The Church of St Martin's at Castleton, was completed in 1863.

Castleton is home to St. Martin's C of E church. This example of religious Victorian architecture still stands tall to this very day. It was completed in 1863 and closed in 1991. It was refurbished in 2002/2003.

Castleton's main apparent architecture is that of the old Victorian style terraces, however there are some renovated areas. 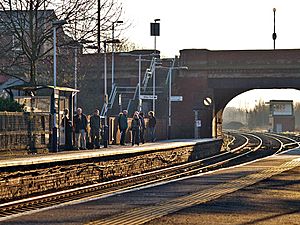 Castleton railway station serves the local community at Castleton, and lies on the Caldervale Line (which connects Castleton to Manchester and Leeds).

Until March 2007, Castleton was home to a Corus steel works. It was built on the site of the former British Railways Castleton Central Materials Depot. In 1954 the Marshalling Ward consisted of four sidings between Castleton East Junction and Castleton North Junction. There was however a further seven sidings on the Down side and nine sidings on the Up side for wagon storage.

Castleton was originally the junction for the branch line to Heywood, which was then extended through Bury to Bolton. A connecting line (known as the Bury South Junction Connecting Line or Bury East Fork) enabled trains off the Castleton to Bolton line to run northwards from Bury on the Clifton Junction to Accrington line. The Bacup line left the Clifton Junction to Accrington line at Stubbins Junction. Therefore, the remaining Castleton to Rawtenstall line is combination of remnants of several lines.

The Rochdale Canal runs through Castleton, adjacent to the railway on one side, and Queensway on the other. The road passes over the canal via an old brick bridge, which was refurbished along with the canal. Castleton is also home to two of the canal's locks, as it goes on a down gradient through Slattocks and on its way into Manchester city centre.

All content from Kiddle encyclopedia articles (including the article images and facts) can be freely used under Attribution-ShareAlike license, unless stated otherwise. Cite this article:
Castleton, Greater Manchester Facts for Kids. Kiddle Encyclopedia.