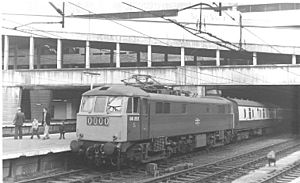 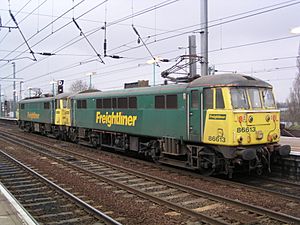 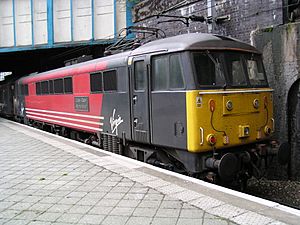 Class 86/2, no. 86229 'Lions Club International', at Birmingham New Street on 5th June 2003, on a service to London Euston. This locomotive was one of the final three Class 86 locomotives operated by Virgin Trains, and was withdrawn from service in September 2003. It has since been bought for further use by Fragonset Railways.

The British Rail Class 86 was the standard electric locomotive built during the 1960s, developed as a result of testing with the earlier Classes 81, 82, 83, 84 and 85. One hundred of these locomotives were built from 1965-1966 by either English Electric at Vulcan Foundry, Newton-le-Willows, or British Rail (BR) at their Doncaster works. The class was built to haul trains on the then newly electrified West Coast Main Line, from London Euston, to Birmingham, Crewe, Manchester Piccadilly, Liverpool and later Preston and Glasgow. They helped to replace steam locomotives, which were finally withdrawn by BR in 1968.

All content from Kiddle encyclopedia articles (including the article images and facts) can be freely used under Attribution-ShareAlike license, unless stated otherwise. Cite this article:
British Rail Class 86 Facts for Kids. Kiddle Encyclopedia.