Fremontodendron, with the common names fremontia, flannelbush, and flannel bush, is a genus of three known species of shrubs native to the Southwestern United States and northwest Mexico.

They are within the botanical family Malvaceae. Formerly they were treated within the Sterculiaceae, tribe Fremontodendreae, together with the genus Chiranthodendron. The genus Fremontodendron was named in dedication to John C. Frémont, who first collected it during an 1846 expedition to Alta California.

The leaves have a leathery and fuzzy texture reminiscent of flannel (thus the name), and the yellow to orange flowers are large and showy. The leaves and young shoots can cause skin and eye irritation. 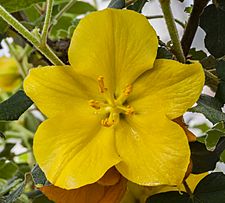 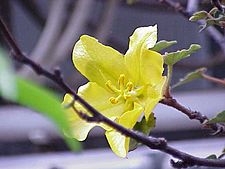 There are three species:

A decumbent and low spreading form, 3 feet (0.91 m) in height and 6 feet (1.8 m) in width, has yellow-orange flowers, and is endemic to the Sierra Nevada foothills, nearly all of the individuals of this subspecies are found in the Pine Hill Ecological Reserve in El Dorado County. In nature it only grows in metal-rich gabbro soil, a red weathered soil of volcanic origin. It requires fire for seed germination, but with the nature reserve is near human settlements fire ecology is suppressed. It is a federally listed endangered species.

Endemic to the central Peninsular Ranges, known from about ten occurrences in northern Baja California state and adjacent southern San Diego County, California. However, it has most recently been confirmed to exist in only two of those locales currently.

There are a number of populations of uncertain taxonomy status. They include:

The current Jepson manual does not recognize this subspecies, using Fremontodendron californicum, but the form is different enough that it is horticulturally recognized by this name. It is typically smaller and more open in form than the species, with much smaller leaves and flowers. It grows 6–15 feet (1.8–4.6 m) in height and 4–12 feet (1.2–3.7 m) in width.

Fremontodendrons are cultivated as ornamental plants. They are valued for their bright yellow flowers, produced over a long period on a rapidly growing shrub or small tree. They are tolerant of pruning for size or shaping. They are adapted to dry, poor soils in a summer-dry, warm, sunny climate. They may succumb to root rot in heavy clay soils and/or summer irrigation.

The three species and varied hybrids/cultivars are used in native plant, water-conserving, and wildlife gardens in California. They are also planted in gardens in England. 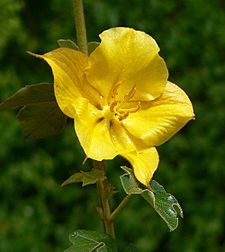 All content from Kiddle encyclopedia articles (including the article images and facts) can be freely used under Attribution-ShareAlike license, unless stated otherwise. Cite this article:
Fremontodendron Facts for Kids. Kiddle Encyclopedia.