The French Quarter is historict district and a section of downtown Charleston, South Carolina, United States, that is listed on the National Register of Historic Places.

The area is considered to be bounded by the Cooper River on the east, Broad Street on the south, Meeting Street on the west, and Market Street on the north. The French Quarter is basically within the original "walled" city of Charleston. The area began being called the French Quarter in 1973 when preservation efforts began for warehouse buildings on the Lodge Alley block. The name recognizes the high concentration of French merchants in the area's history. It was named to the National Register of Historic Places in 1973. 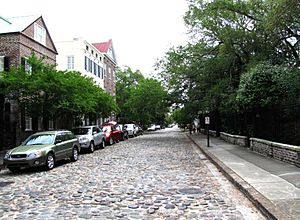 Chalmers Street in the French Quarter District, May 2010

The neighborhood was settled as part of the original Grande Modell of Charles Towne in 1680. It is famous for its art galleries; it also has many restaurants and places of commerce as well as Charleston's Waterfront Park.

Charleston's French Quarter is home to many fine historic buildings, among them, the Pink House Tavern, built around 1712, and the Old Slave Mart, built by Z.B. Oakes in 1859. Also in the French Quarter are the Dock Street Theatre, arguably the first site of theatrical productions in the United States, and the French Huguenot Church, a beautiful Gothic Revival church which houses the sole-surviving French Calvinist Congregation in the United States. St. Philip's Episcopal Church, the first congregation in Charleston, whose current building dates to 1835, is also in the French Quarter. St. Philip's graveyard is the final resting place of Edward Rutledge, the youngest signer of the Declaration of Independence, and U.S. Senator and Vice President John C. Calhoun, whose body was exumed during the Civil War and buried near the church in an unmarked grave. Later, after the war, his body was moved back to its original location and a memorial constructed in the 1880s.

All content from Kiddle encyclopedia articles (including the article images and facts) can be freely used under Attribution-ShareAlike license, unless stated otherwise. Cite this article:
French Quarter (Charleston, South Carolina) Facts for Kids. Kiddle Encyclopedia.