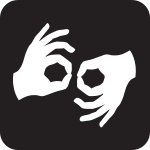 French Sign Language (French: Langue des Signes Française, LSF) is a sign language for deaf people. It is used in France. There are approximately 3,506,800 people living in France who suffer from deafness. LSF differs from American Sign Language (ASL) although there are many common signs.

Charles-Michel de l'Épée is considered the father of sign language. In 1771 he started the first free school for the deaf in Paris. He took in deaf students from many different places. Some came from Martha's Vineyard in the United States. There was a good deal of hereditary deafness there and the residents adopted their own sign language.. Many came who used a local sign language. L'Épée combined all these into a standard sign language. His sign language eventually developed into the French Sign Language and is widely used all over Europe.

All content from Kiddle encyclopedia articles (including the article images and facts) can be freely used under Attribution-ShareAlike license, unless stated otherwise. Cite this article:
French Sign Language Facts for Kids. Kiddle Encyclopedia.