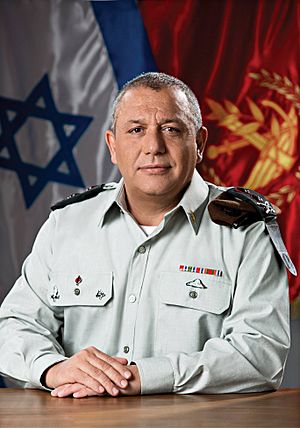 Gadi Eizenkot, Hebrew: גדי איזנקוט, (born May 19, 1960 in Tiberias) has been the Chief of General Staff (Ramatkal) of the Israel Defense Forces (IDF) since February 16, 2015.

Eizenkot has the rank of lieutenant general (rav aluf).

He has been an Israeli soldier since 1978. He commanded the following units: the Northern Command, the Golani Brigade, the Judea and Samaria Division, and the Operations Directive. In between he was military secretary to prime minister Ehud Barak from 1999 to 2001.

Eizenkot is a Maghrebic Jew (he is of Jewish-Moroccan descent). During his youth he lived in Eilat. He studied history at Tel Aviv University and political science at Haifa University. He also studied at the United States Army War College.

He is married with five children, and lives in Herzliya.

All content from Kiddle encyclopedia articles (including the article images and facts) can be freely used under Attribution-ShareAlike license, unless stated otherwise. Cite this article:
Gadi Eizenkot Facts for Kids. Kiddle Encyclopedia.