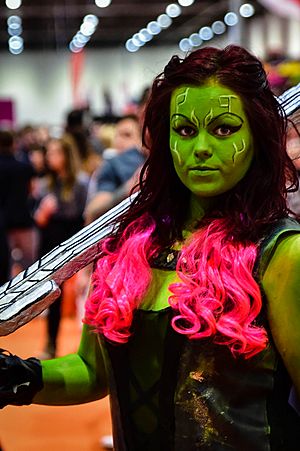 A cosplayer dressed up as Gamora.

Gamora is a Marvel Comics character created by Jim Starlin and is Thanos' adoptive daughter. She is a member of the Guardians of the Galaxy.

Gamora has been played by Zoe Saldana in four movies and has been voiced by Vanessa Marshall and Nika Futterman in cartoons.

All content from Kiddle encyclopedia articles (including the article images and facts) can be freely used under Attribution-ShareAlike license, unless stated otherwise. Cite this article:
Gamora Facts for Kids. Kiddle Encyclopedia.